Warning: define(): Argument #3 ($case_insensitive) is ignored since declaration of case-insensitive constants is no longer supported in /homepages/46/d97679394/htdocs/vesselsofhonour.ca/newsite/wp-content/themes/the-church-lite/functions.php on line 168

Warning: define(): Argument #3 ($case_insensitive) is ignored since declaration of case-insensitive constants is no longer supported in /homepages/46/d97679394/htdocs/vesselsofhonour.ca/newsite/wp-content/themes/the-church-lite/functions.php on line 169

Warning: define(): Argument #3 ($case_insensitive) is ignored since declaration of case-insensitive constants is no longer supported in /homepages/46/d97679394/htdocs/vesselsofhonour.ca/newsite/wp-content/themes/the-church-lite/functions.php on line 170
 Biography – Vessels of Honour Skip to content
Menu 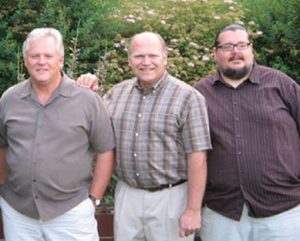 The year was 2002.   Good friends Ed Poulain and Phil Foster were driving in a Red Convertible talking and sharing about the Goodness of God.   Both Ed and Phil had been involved with several groups in the past and decided to form another one.  After some discussion and a hand shake, we agreed on the name Vessels Of Honour.

Since that day to the present, Vessels Of Honour have traveled extensively through Ontario, sharing in church services and Concerts.

I guess only Heaven knows, the number of miles this group has traveled. Many times the group has arrived back home at 1 or 2 a.m. and had to get up for work the next day.    The group members have changed several times over the years as is the case with many groups.   The Present group consists of Ed Poulain (lead), Laverne Boyle (baritone), Ian White (tenor) and Glen Switzer (bass)

Ed Poulain has been around the block a time or two.   Starting in his early days singing with the Mallory Quartet to present day, His smooth lead voice has remained constant and only improved with age. Ed is usually asked to sing in his Home Church or he will travel many times, back to his home roots to sing in Gilmour Ontario, or Lake St. Peter.

Laverne Boyle sang with a group called the Soul Reflections early in his singing career.  Laverne possesses a smooth baritone voice and easily fills in that ‘middle’ part.   A good baritone singer makes or breaks a quartet—-and Vessels Of Honour found a good one in Laverne.

Ian White has been singing tenor all his life.  It doesn’t matter if it’s leading worship at church, or banging out some tunes on the piano—if its music—-Ian can sing it.   Ian can sing a whole concert, jump in the car to go back home and three or four hours later, is still singing in the back seat!  Ian has a remarkable range, and can belt out those high notes with power and ease—-and yet, can take a soft gentle approach to a song, which seems unbelievable to the listener.

Glen Switzer is the bass singer for the group.   Glen’s name may sound familiar, to anyone who has been around Canadian Southern Gospel for any length of time.   Glen sang with his brothers for many years.   Don, Bob and Dale Switzer along with Glen, made up the Switzer Brothers.   They probably were one of the best sounding quartets there was in this country.   Glen can handle those low notes and adds a solid bottom range to the group.

Vessels Of Honour try to choose their songs carefully.   Their mission in life is to sing for the Lord Jesus, and to give God the glory.  The group has experienced many trials and personal loss, but through it all, the mission, which is to glorify God through their talents, remains the same..